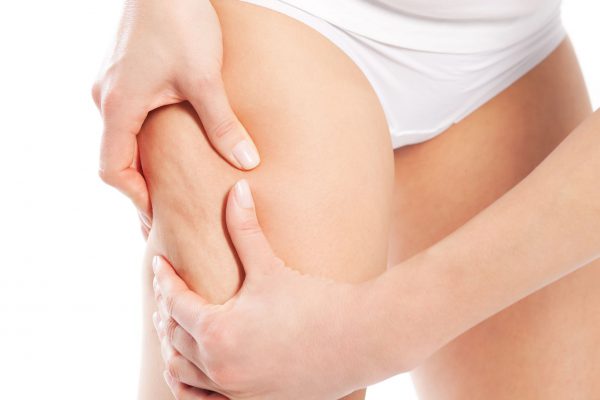 Firstly, having cellulite is not the same as being fat, even slim people can have cellulite. So what is cellulite? Cellulite is the bulging of fat cells causing a bumpy appearance on the skin. This is informally referred to as orange peel. 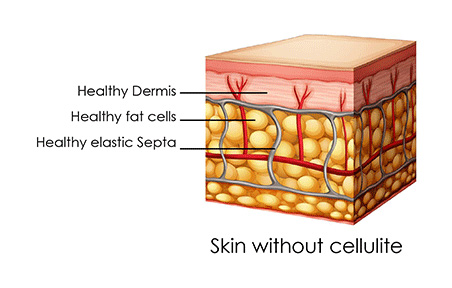 How is cellulite formed?

There are many factors that contribute to the formation of cellulite; here are a couple of the most important ones to consider: 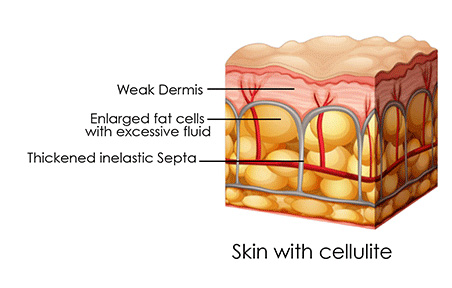 1. Decreased elasticity of Dermis
The number of elastin and collagen fibers in the Dermis reduces with age, causing it to weaken. Poor blood circulation speeds up this process due to the lack of nutrient supply. When the Dermis is weakened enough, fat cells are able to push the skin upwards causing the appearance cellulite.

2. Stiffening of Septa
The Septa is the connective tissue separating fat cells. With poor circulation and lack of exercise it also weakens and loses its elasticity, limiting its ability to adjust to expanding fat cells. This causes the bulging effect in the middle of a fat cell, which also promotes the appearance of cellulite.

3. Fluid and toxin retention in fatty (adipose) tissue
Fluid retention can be caused by various factors but has a significant impact on cellulite formation. This fluid (called lymph fluid) builds up within the fatty tissues and causes more pressure on the Dermis and Septa. To make it worse, metabolic waste is removed with the lymph fluid, becoming toxic when stagnant, causing even more damage. If not removed, the lymph fluid can become thicker in density and resist flow even more.

Its important to note that the more fluid that builds up in fat cells the weaker the blood supply becomes over time causing a self-propelling downward spiral.

4. Poor blood flow
Blood vessels and capillaries create a transport network to keep the skin healthy. When compromised, nutrient and oxygen supply to these regions are reduced. A lack of exercise or an increase in pressure on the skin, such as sitting or wearing tight clothes can also have this effect. This state weakens the Dermis and Septa which promotes the formation of cellulite.

To treat cellulite, it’s clear that the build up of lymph fluid needs to be prevented and blood flow to the skin needs to be improved. A well functioning lymphatic system is therefore key to the treatment or prevention of cellulite. 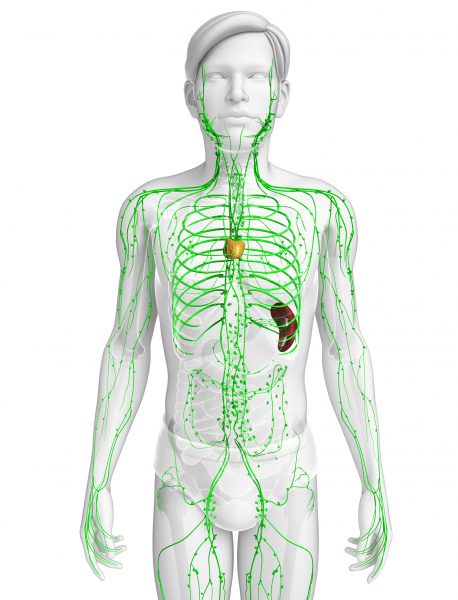 Here is how it works:

What is the lymphatic system?

The lymphatic system forms part of your circulatory system and is comprised of a network of lymphatic vessels that carry clear fluid called lymph fluid, and includes 600-700 lymph nodes spread across your body.

What is the function of the lymphatic system?

Where blood distributes nutrients and oxygen to your tissue, your lymphatic system removes the metabolic waste that is produced. It is described as your body’s garbage removal system. It also plays a vital part in the functioning of the immune system.

How does lymph fluid move around?

The Lymph fluid flows in one direction under the surface of the skin, from the hands and feet, through the main filters (lymph nodes) upward to the base of the neck where the subclavian veins release it back into circulation as plasma in the blood.

There is more than double the amount of lymph fluid in the body than blood. The lymphatic system doesn’t have a pump like the heart to pump the fluid around the body and largely depends on muscle movements.

People that therefore don’t move and exercise enough have a greater risk of having poor lymphatic flow.

What does all of this mean?

People that suffer from water retention and cellulite most likely have a compromised Lymphatic system. This means that the lymphatic fluid is not flowing the way it should. It can be described as the body’s garbage removal system not working, causing waste to pile up in the kitchen and restricting new supplies to come in.

The SleekSculpt™ process restores your system function by:

Learn more about how the SleekSculpt™ Process works.

BOOK NOW for a
FREE consultation